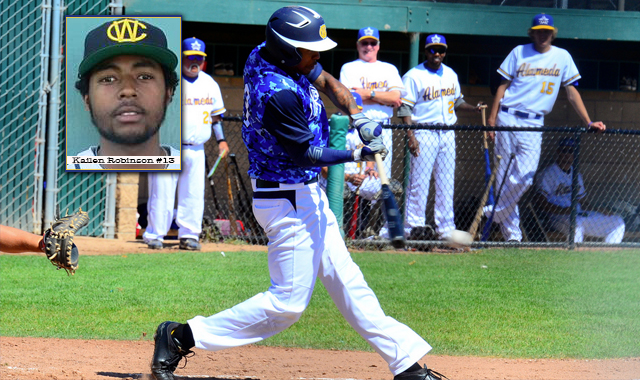 Three years playing with the California Warriors has seen Kailen Robinson mature into an all-around offensive contributor. Robinson always had productive At-Bats, and got himself into position to score runs and help his team win. His .427 Batting Average over 103 At-Bats led the team. Over that time, he struck out only 7 times while walking 11 times.

Once Kailen gets on, he’s a threat on the basepaths, stealing 13 bases and coming around to score 16 times. Defensively, he recorded 51 Put-Outs, 3 OF Assists, and did not commit an error. It’s hard to find an all-around great ballplayer, but Kailen fits the bill.

Going forward, Robinson is transferring from College of San Mateo to Missouri Baptist University, where he will be a fixture in the Spartans’ lineup and is sure to make the Warriors organization proud. The 3-year Warriors veteran is an embodiment of what the First Base Foundation and California Warriors stand for – character, leadership, and personal development on and off the field. We wish Kailen the best, and congratulate him on winning the 2014 California Warriors Most Valuable Player award!

For a full look at his summer stats, CLICK HERE.