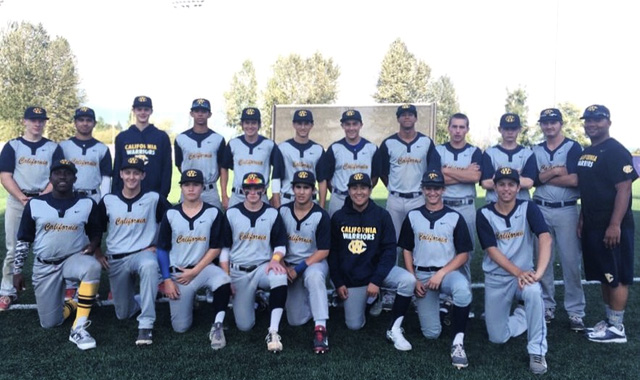 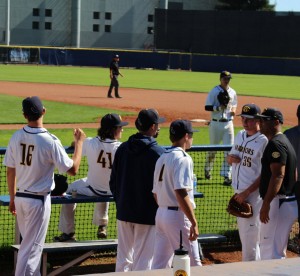 Traditionally, summer baseball teams can feel less cohesive than regular high school and college programs. Players rotate in and out of games more often, tournament schedules can be unpredictable, players schedule showcases outside of the team schedule – it is generally a more scattered experience. The California Warriors, however, provide a different environment for it’s student athletes.

The California Warriors teams are filled with collegiate-bound student athletes who individually need to be seen by college coaches, but each of the players on the White, Blue, and Gold teams are invested not only in their personal development, but in contributing to the team dynamic. The Gold team is made up of graduated seniors and younger players on the fast track to college recruitment, players who typically show up to every game even when they don’t expect to play. Graduated senior Colby Morris, a pitcher on the Gold Team, has been to several games this summer just to watch — he has planned to limit his innings by throwing only once a week — since he wanted to be a part of the team atmosphere and listen to valuable coaching advice. When the Gold Team traveled to Reno for a tournament, Jack Harris, who had recently injured his leg, sat through the four-hour drive knowing he was unable to play; he simply wanted to be with the team and watch baseball for a weekend. The student athletes on the Warriors teams recognize that the coaches in the organization convey a wealth of information in the dugouts and that they can watch their peers to step up their own game as opposed to exclusively going to games where they individually are featured.

Some who have played with the Warriors in previous years who did not intend to play again this summer heard about the great environment on the field for all the Warriors teams and reached out to the organization to see if they could make their way onto a squad at the last minute. Gold team player Paul Kunst, who didn’t start the summer with the Warriors, made his way onto the team after hearing of the expertise in the dugouts and the camaraderie between the players, eventually providing a great performance in the Utah tournament.

Throughout the summer, the coaches with the White team — made up of players who haven’t seen much varsity action — have seen their players develop into better all-around athletes who are better equipped to make quick decisions during games. The Blue and Gold teams have each seen huge success in the summer and will play against their top competition of the summer in San Diego to conclude their summer seasons.