A Summer of Sabermetrics 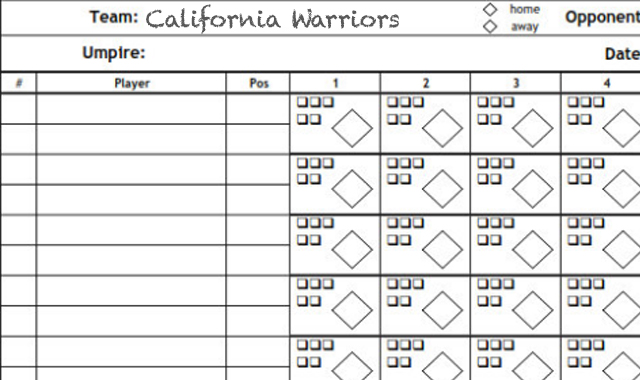 Sabermetrics is a term originally coined by Bill James, a baseball writer, historian, and statistician who described it as “the search for objective knowledge about baseball.” Through careful analysis of very specific batting, fielding, and pitching statistics, sabermetric analysts are able to calculate optimal line-ups and develop strategies that maximize a team’s chances of winning. The central focus in the now-classic book and blockbuster movie, “Moneyball: The Art of Winning an Unfair Game,” The Oakland Athletics organization has found great success utilizing Sabermetrics. Here at the First Base Foundation, we thrive being on baseball’s cutting edge, and have used Sabermetrics to generate wins all summer.

Interns, Connor Bruen and JP Nash – under the direction of First Base Foundation General Manager Noah Jackson – used the Warriors’ statistics in early July to create suggested line-ups for the California Warriors collegiate team. Here are a couple sample lineups from Connor and JP:

Lead off: Merriwether, SS
Merriwether brings a very high OBP and has a good BB/K ratio. Then when he gets on base, he has a great speed and out of 10 attempts stealing, he has stolen 9 bases. This creates a high chance of getting the lead off hitter into scoring position. He has also been hot recently and so getting him up to the plate while he is still hot is important.

Second Spot: Karas, DH
Karas leads the team in many stats including RC, OPS, OBP, SLG, and ISOP. This made me wonder if he should go high up in the line up where he would get more ABs or in the 4th/5th spot where he will have a better chance of base runners in front of him. I decided that putting him second behind a great base runner that will be able to take advantage of Karas’ skills and give the team an early lead.

Third Spot: Jones, OF
The left-handed Jones will do well as a #3 hitter because he has a high OPS, and with his batting average at almost .400 he should be able to drive in the runners ahead of him. He has quite a few doubles so his strong bat should be able to score the speedy Karas and Merriwether. Another advantage of Jones this high up, is that he hasn’t hit into any double plays so far this season and therefore is unlikely to give the opposition a chance to get earlier hitters out.

Fourth Spot: Miguel, 3B
Miguel has a very good SLG and is a big threat to hit a ball deep for an extra-base hit or for a sacrifice to advance our base runners. He also has 8 stolen bases so has good speed and isn’t likely to clog the bases and creates scoring opportunities for following big hitters.

Fifth Spot: Snider OF
Snider is another big slugger. With 4 doubles, 4 Triples, and 2 Home Runs he has a very high RC and can knock in base runners from anywhere on the bases. He has 14 walks and 16 strikeouts so he does know how to battle and get the pitch count up. I think he should work well here and create a winning situation.

Sixth Spot: Leandro-Farr C
He hasn’t had too many at bats so far this season which is why I don’t have him higher in the line up but I have to respect his stat line and give him the start. He has a very good .433 batting average with a lot of power and will create runs.

Seventh Spot: Burke 1B
Burke is a great batter – his RC is an impressive 14.643 – but his BB/K rate is 13/3. This could be a sign of swinging too much or just not seeing the strike zone well, so when he turns this around, his great run-creating potential will help him climb back up the lineup.

Eighth Spot: Rabin 2B
Rabin is a strong hitter and can knock in runs and clear the bases at the end of the line up, as evidenced by his 0.891 OPS. Boosting his RC of 9.333 will move him up in the order.

Ninth Spot: Robinson OF
Robinson is a strong hitter and I have him last so that he has the chance to be on base for the top of the line up. He is very fast and won’t be clogging up the bases when Merriwether gets on right behind him. Even though he won’t have the opportunity to get as many at-bats, his high OBP will help create scoring opportunities. He doesn’t strike out often, and should do a good job of improvising ways to get home.

Lead off: D. Karas, 3B
Leads the team in most categories. Has highest OBP (on-base percentage) on team and that’s important for a leadoff hitter. Has the highest RC (runs created) 21.490, which has the greatest correlation in runs scored per game. Can also be used as a DH. Highest OBP: 0.566, important as leadoff hitter. Also tied for second highest BB/PA (walks per plate appearance): .132. Will work count. Highest OPS (on-base plus slugging): 0.943 and highest SLG: (slugging): 0.929, ideally will lead off inning with extra base hit and advance on other balls in play. Highest ISO (isolated power): 0.452. BA (batting average): 0.476, BB/K (walks per strikeout): 1.400.