On Thursday March 28th, Cal Baseball played its first home game under the lights in its 121-year history. 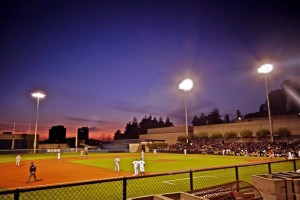 Head Coach David Esquer said that “Never could have envisioned such progress for his team two springs ago, when supporters came through with the money to save a sport that had been set for elimination by the Cal administration in a cost-cutting move,” writes Janie McCauley of the Associated Press. “It’s a game-changer for our program,” Esquer said. “I think we’ve plugged up a little bit of a competitive disadvantage to our program. Figuratively, it’s a big statement. Out there, you show that Cal baseball is not just in survival mode, but we’re in thrive mode. We’re trying to thrive as a program and move forward and advance ourselves. We’re not just trying to hang on by a thread.”

Lance Knobel of Berkeleyside writes, “The renewed support for baseball was demonstrated in the lights and a snazzy new scoreboard: the University and the baseball supporters’ foundation jointly took out $1 million in loans for the lights and scoreboard, counting on increased ticket sales and advertising for the revenue to pay back the loan. The support came from alumni like Dan McInerny, who played right field for the Bears, 1978-80. McInerny was watching from ‘cheapskate wall’ at Evans Diamond. ‘This is my favorite spot.’”

Warriors alumni Devin Pearson was the first Golden Bear to get a hit under the lights of Evans Diamond, when he led off the bottom half of the first inning with a single. Although the Bears lost to USC, 4-3, the night was still an undeniable success.