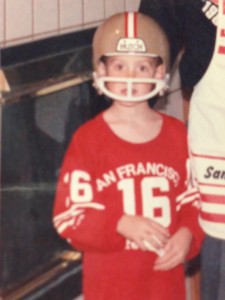 Since birth I have been a 49er baby. It was the end of January 1982 and my parents were expecting their first child. At the same time, the San Francisco 49ers were making their way through the playoffs in what was a miraculous resurgence from being regarded as one of the worst teams in the NFL for a long time. When it was clear that the Niners would play for their first Super Bowl Victory on January 24th, my parents quietly hoped that I would wait to make my first appearance until after Super Bowl XVI. My parents were able to watch the 49ers win their first Super Bowl and I came a few weeks later.

I was born at the beginning of what would prove to be one of the greatest sports dynasties of all time.  My parents have had season tickets for the majority of my life, so I have had the luxury of growing up watching in person the likes of Bill Walsh, Jerry Rice, Joe Montana, Ronnie Lott, “Hacksaw” Reynolds, Steve Young, Ricky Watters, Richard Dent, and many other greats. Each year it was a major disappointment for the Niners to miss the Super Bowl much less the playoffs. Unfortunately I have had to watch the team go through a disappointing stretch for nearly a decade where they have not even been a shadow of their former selves missing the playoffs 7 of the past 10 years. With their second trip to the playoffs in as many years, this recent resurgence with new coach Jim Harbaugh is eerily reminiscent to the one they made during the 1981 season.

My parents were gracious enough to give their two tickets to tomorrow’s playoff game to my brother and I. I couldn’t be a bigger mix of emotions. Joy for the chance to spend time with my brother watching one of our beloved local teams. Excitement for the possibility of watching first hand the beginning of a new San Francisco dynasty. Anxiety behind the fact the 49ers are playing against a formidable foe in the Green Bay packers, and Aaron Rogers, one of the best quarterbacks in the National Football League.