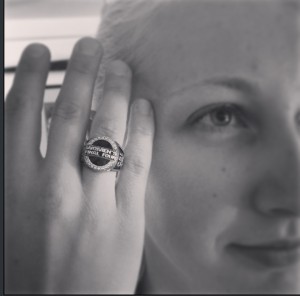 There’s nothing better than celebrating 8 long months of hard work, grueling practices, and nail-biting games than at an extravagant Mardi Gras Parade with some of the best student athletes in the collegiate world.

The highlight of this journey isn’t just the games played; it’s the whole celebration of the student athletes and their extraordinary work leading up to this moment. From the second we walked into “Mardi Gras World”, a marching band filled our ears with fight songs and festive music. It was hard to tear ourselves away from the gorgeous Final Four rings on display, but we simply had to adorn ourselves with colorful boas, beads, and masks provided and join in the celebration with all the other teams!

The Final Four Salute Premiere at Mardi Gras World was a celebration to salute the Women’s Final Four student-athletes. Televised and open to the public, this theater style event also honored four local women for their work in the community. Each Final Four team also had the chance to walk down the catwalk to their seats as their school’s fight song played in the background, and each team captain gave a short inspirational speech about their season, their team’s struggles and successes, and how amazing it felt to be at the National Championship.

I am so grateful for the opportunity to have been a part of this dynamic and powerful Cal Women’s Basketball team. The Final Four experience was a celebratory time spent with these empowering individuals who showed that with teamwork, passion, and vision… anything is possible!