My Summer As A California Warriors Coach – Dom DeVille

Becoming a baseball coach is a professional path I have always envisioned myself taking. I was surprised and excited when I got a call from Ryan Burke, VP of baseball operations of the First Base Foundation, asking me if I wanted to coach for the California Warriors this summer. I was also a little concerned and hesitant because I did not feel I had the requisite skills to be a successful California Warriors coach. Ryan said not to worry and that we would have time before the beginning of the season to learn effective coaching techniques, and that he would initially assist me with my team. With the help and guidance of the FBF Executive Director and Coach Development Program personnel, I was successful in learning the ins and outs of coaching and what goes into efficiently coaching a summer baseball team. 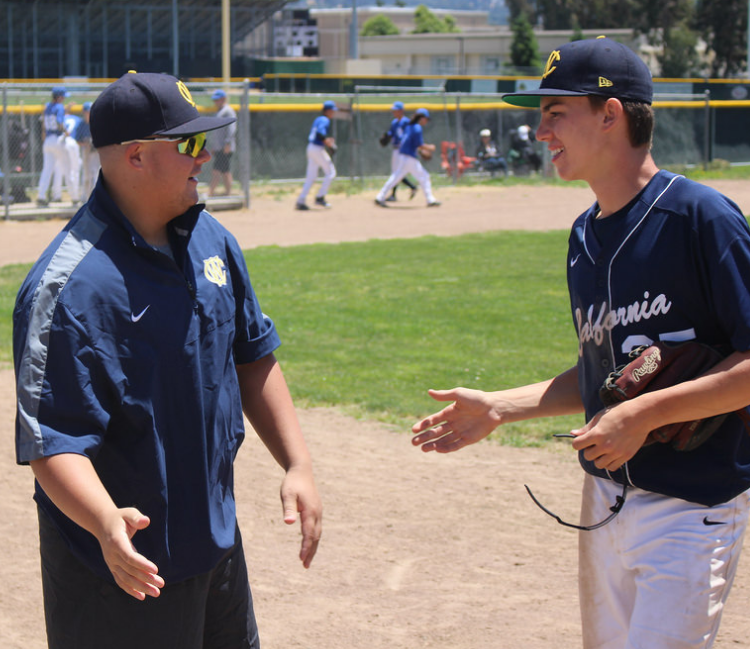 I never gave up on the game of baseball. I was an average player and an average student, but had a passion for the game. After high school I played for College of Marin where my game and grades improved tremendously and was offered scholarships to play at the next level.

The University of Montevallo, located in Alabama where I had the two best years of my life, recruited me to play baseball. At Montevallo, I was an academic all conference team member and was on the president’s list for academics as well, two things I thought I would never achieve. I have experienced adversity in baseball at almost every level and know what it takes to overcome it. Baseball is not easy and there is no right way to do things. Being a coach with the FBF/CW has allowed me to use my experience and knowledge of the game to help student athletes find their own paths.

The first few weeks of the summer I spent learning from and coaching with Ryan Burke. Ryan has been in the coaching game longer than I have and has had success so it was nice to get to work with him. In the office of the First Base Foundation, Ryan developed a coach’s manual, which helped me with the overall organization of my team. At first, Ryan acted as a facilitator because I was still new to coaching, but after a period of time he allowed me to coach my team without his supervision. The FBF made my transition from player to coach a very easy and comfortable one. Through the Coach Development Program, I have learned how to coach and bring out the best in all my players.

#caliwarriors Silver Team Head Coach Dominic DeVille discusses what he has taken away from coaching this summer. #baseball

Although Ryan allowed me to run my team, it would’ve been very difficult without my assistant coaches. I spent most of my summer with Joe Jimenez, California Warriors alum who is currently playing at Chapman University. Joe was a tremendous help to me because he provided skill in the one position I have never really played, catcher. Joe was able to work with our young catchers by critiquing them and helping to develop their own skill set. I also spent some time with Christian Merriweather, California Warriors alum currently playing at College of Marin. Christian helped a great deal with outfielders in the program. Practice was a big part of our summer as we were able to bring all of our teams together. I believe that it is important for our younger players to play against better competition because the test challenges them to play at a higher level.

I am a Communication Studies major at the University of Montevallo, and much of what I study relates to my experience as a coach. Through a Leadership Communication course I took last semester I identified myself as a transformational leader. A transformational leader is one who focuses on the development of others and instills a vision towards a goal that benefits the entire team. This summer I was able to exert my transformational qualities through my coaching. In all situations I aim to seek out the positives and when I do critique, the goal is to be constructive and beneficial.

Interpersonal communication is something that is very relevant and important in the world of coaching. Working with student athletes that are different in their own way has helped improve my interpersonal skills. Coaching for the First Base Foundation and the California Warriors has opened a door for me that will help me in my future career. I have built relationships with people that will last forever and a support system that will always be there. I am very grateful for all the First Base Foundation has done for me and I highly recommend working with the FBF to anyone who has the opportunity!