I would say my first love in life was baseball. I’m an avid player who has been playing for as long as I can remember, and for more teams than I can remember. If finding love once wasn’t enough, I found love a second time in freestyle skiing. I am not only a catcher on the baseball diamond for the California Warriors Blue Team, but also a freestyle skier on snow. This past week, I have been in Oregon at a summer ski camp. The camp I attended is called Mt Hood Summer Ski Camp. MHSSC is a camp that draws skiers from all over the world, including Japan, Canada, Germany and even Luxembourg. Mt Hood is a glacier in Oregon that has snow year round, which is why it draws so much attention. Most of the campers are teens and young adults who all are relatively advanced in skiing. Mt, Hood Summer Ski Camp is for freestyle and race skiers to come and progress at a sport they love. During my week away I learned how to land new tricks and also learned how NOT to land. While trying a new aerial trick I landed upside-down and managed to give myself a minor concussion. If that wasn’t enough, while on this trip I also managed to fall on a rail and may have cracked one of my ribs. As you may be able to guess, my parents were thrilled to hear about this. 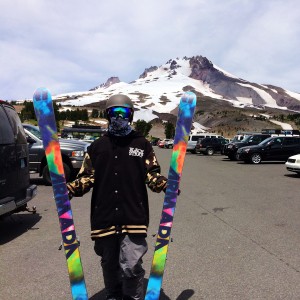 My first time on skis was when I was two years old. Ever since then skiing was a family bonding experience that I always looked forward too, much like going to baseball games with my family. Skiing, like baseball became one of my passions. I quickly surpassed my parents’ ability to ski and became interested in slopestyle. Something about watching athletes spinning and flipping themselves off massive jumps and seeing the ease in which they do it would always give me this excitement. The only comparison I can make to this rush of excitement is watching one of my favorite baseball players hitting a massive home run. Because of this feeling, I dedicated myself to trick skiing, and enrolled myself in the summer ski camp.

Although this past week in Oregon was very enjoyable, I’m happy to be back. I missed playing baseball and realized that there truly is something special about stepping on a baseball diamond that will give you a feeling that no other sport can. I can’t wait to get back out there on the diamond for the California Warriors in their upcoming games.