O’Koyea Dickson Hits It Out of the Park! 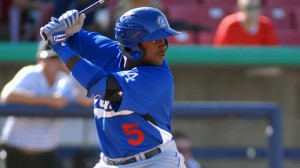 The San Jose Giants scored the final four runs of Monday’s game, rallying from a three-run deficit for a 6-5 win over the Quakes at Municipal Stadium.

A sac fly off the bat of Angel Villalona completed the come-back, as the Giants avoided a four-game sweep on their own home field, ending Rancho’s four-game winning streak and forcing the Quakes to settle for a 4-3 road trip up north.

Pedro Baez (1-1) suffered the loss, as he gave up a lead-off double to Ryan Caven to open the eighth and surrendered the sac fly to Villalona.

Rancho had a shot in the ninth, as Ryan Mount singled with two outs against Giants’ closer Hunter Strickland. The rally was short-lived though, as Strickland rebounded to retire Noel Cuevas, ending the game and recording his fourth save of the year.

The Quakes had leads of 2-0 and 5-2 on Monday night, but watched the Giants rally back to tie the game on both occasions.

O’Koyea Dickson’s fifth homer of the year in the first gave Rancho an early 2-0 lead for Jarrett Martin.

Martin was unable to hold the lead though, as San Jose tallied once in the first and again in the second.

The Quakes got three in the fourth, highlighted by run-scoring singles from Mount and Rob Garvey, as the Quakes took a 5-2 lead against Giants’ starter Clayton Blackburn.

Command got the best of Martin in the fourth, as he walked a pair of two-out hitters that came into score on Elliott Blair’s two-run double, pulling the Giants to within a run at 5-4.

Devin Harris’ solo homer to lead off the fifth tied the game, his league-leading tenth of the year.

Martin allowed a total of five runs on six hits over five innings in the no-decision.