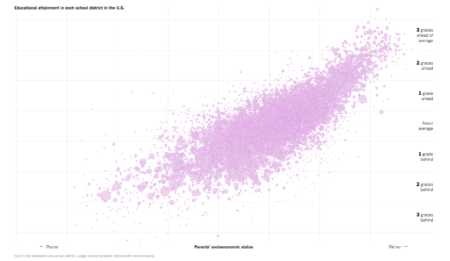 In a recent study, researchers from Stanford University found that sixth graders in the wealthiest school districts are four grade levels ahead of their counterparts in poor districts. The study clearly shows both that the socioeconomic conditions that students face heavily impact their achievement and that race and class are still very closely tied – “Test scores reflect not just the quality of schools or their teachers, but all kinds of other factors in children’s lives, including their home environment; whether they attended a good preschool; traumas they have experienced; and whether their parents read to them at night or hire tutors…Not only are black and Hispanic children more likely to grow up in poor families, but middle-class black and Hispanic children are also much more likely than poor white children to live in neighborhoods and attend schools with high concentrations of poor students.”

These findings, in tandem with the new NCAA academic guidelines for athletic eligibility, accentuate the need for our communities to support minority student athletes in their pursuit of higher eduction.