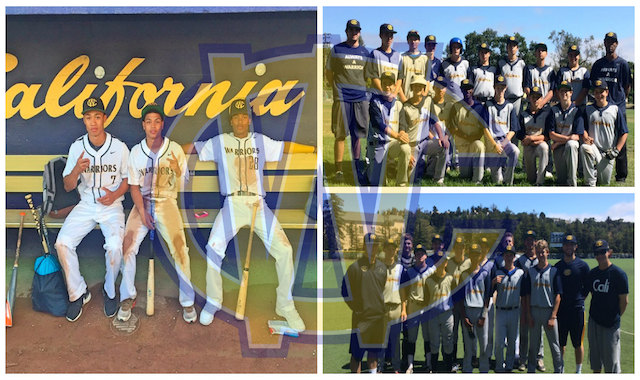 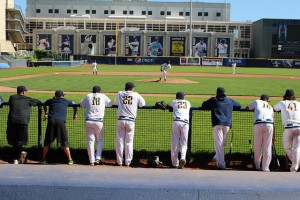 The California Warriors are having a great start to their season. The student athletes are working hard, building leadership skills, and playing clean baseball. The combination of having fun, swinging the bats well, and playing great defense has allowed all three Warriors teams to start the season with a bang.

The 16U White team went 3-1 this past week and has an overall record of 7-5. Led by coaches Ryan Burke, Cameron Merriweather, and Casey Levy Tulloch, this fundamentals building team is getting to know each other on the field and building a strong cohesive unit.

The transition from BBCOR metal bats to Wood bats for the summer usually requires several adjustments, but the student athletes have adapted well and the offense is continuing to pick up each week. Jacob Berg and Keith Whittaker have led the way in hitting, while Alex Bires, Ryan Copeland, and Sean Henry have handled most of the pitching duties, attacking hitters, throwing strikes, and getting outs.

On Monday June 22, the White team earned its 7th victory against Redwood, with an impressive pitching and hitting performance, leading to a final score of 7-1. The team will have a few days off before they head up to Reno to play in a wood bat tournament beginning Thursday June 25th and ending Sunday June 28th.

The 18U Blue Team has posted a strong beginning to the season as well, going 3-2 this past week, and 7-4 overall thus far. The Blue team has played clean baseball, allowing just 3 runs in their last 3 games, thanks to solid pitching and defense. On Saturday, June 20th the Warriors held the Berkeley Buzz to 1 hit, and with some late game heroics, won the game on a walk off homerun by CJ Novogradac. Sunday June 21st, the Warriors Blue team took the first game of a 2 game series versus the Eastern Cats. Nate Kochhar pitched 5 scoreless innings against the Cats, and an early RBI by Sean Robinson provided the only run of the game. Alex Ritch came in for the final two innings and got the save.

Monday June 22nd, the Warriors fought hard for 9 innings but ultimately fell to the cats 4-2 in the last inning. The Warriors Blue team now heads into the Zoots tournament, and we look forward to following their upcoming games.

The 18U Gold team went 3-0 last week and has the best record of the Warriors teams at 8-0. All senior baseball players on the Gold team will be playing college baseball in the Fall of 2015. Tam High graduate Mason Collins has pitched extremely well, connecting with his high school catcher Patrick Shore behind the plate. Strong pitching performances from Jack Harris (another Tam pitcher), Nick Simonian, and Quinton Gago have combined well with timely hitting and defense.

As the Gold team continues to roll, they head to The University of Washington on Thursday June 23rd for a wood bat tournament to play on one of the nicest college facilities in the nation. The Gold team will not only be exposed to some strong competition, but will be given an opportunity to work out in front of visiting college scouts.

With such a strong and experienced coaching staff and a group of talented student athletes, all three Warriors’ teams are having an extremely successful summer season. The coaches reflect a professional attitude, respect the game, and have a good time playing and teaching our national past time. The student athletes will continue to enhance their baseball skills and will also work on their teamwork, self-esteem, and leadership skills.