The Magic Behind the Diamond 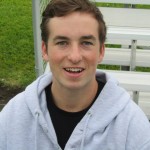 As I watched the California Warriors Collegiate Team play against the Sacramento Spikes during the first game of the season, I thought to myself about what it took to reach this point. In the Front Office, three days prior to that game, we were organizing the last-minute details for the four California Warriors’ teams; finalizing their game schedules, making sure that none of the games and fields were overlapping, working on getting the players their stylish uniforms, (especially the awesome Collegiate Away camouflage jerseys), and fielding the relentless phone calls and emails filled with questions from players and parents. The Front Office of the First Base Foundation is hectic. There is always a situation that we have to deal with while trying to make the season as effortless for the players and parents as possible.  Yet somehow, through all of the loud communication and the distractions, our front office team makes everything run smoothly.

For example, we set up a text-messaging program named One Call Now. One Call Now is supposed to send out a text alert to a Warriors team to notify them of an urgent change, such as a cancelled game or the location change for a practice. This service was supposed to simplify communication between the staff and players, but when we were setting it up, it seemed to only exacerbate the situation.  While establishing this service an we “accidentally” sent out a phone message to the Collegiate Team, the Blue Team, the Gold Team, and the White Team saying, “Test. Test. Test. From the First Base Foundation”.  For the rest of the day, there wasn’t a moment when the phone wasn’t ringing off the hook, with everyone asking the same question: “Why did you just call me?”  Pretty soon, even the sound of the phone was enough to send the staff running. Every time the phone rang, everyone in the office looked for someone else to answer the phone, turning the afternoon into a constant game of “It’s your turn!”

Of all the people in the office though, Noah Jackson wins as the man with the most phone calls. He has the hookups on one of the most popular aspects this year: Customized Nike Gear.  It seems like everyone that has ever been affiliated with the Warriors or First Base Foundation wants some of this astounding attire. There are legit socks, tremendous shirts, bossy shorts, awe-inspiring hats (some of which are for sale for $25), and jaw-dropping jerseys.  The Collegiate home jerseys are clean whites that look incredibly fresh, while the away jerseys are a blue camouflage that are absolutely splendid.  Our Equipment Manager, who is in charge of keeping the teams looking good, meticulously maintains all the uniforms.  During the offseason, Noah spent approximately 70% of his time looking for the freshest gear, finding the best prices, and designing custom swag for the teams.  This is the first year that we needed to order more clothing due to high demand.

I have never worked in a situation like this before where everybody contributes and everyone’s thoughts and ideas are equally important.  I now realize that the baseball team is only part of what the First Base Foundation is about.  It is a place of ideas, innovation, cooperation, coordination, humor, tolerance and generally a positive and encouraging work environment.  Not to mention… gourmet lunches are provided!

Written by Dillon Hamer. Dillon is an intern in the 2013 Summer Internship Program.