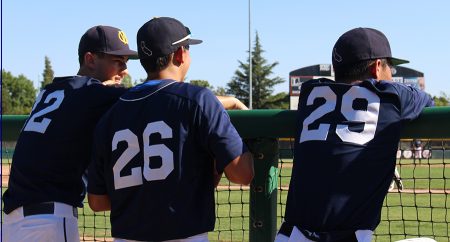 This past weekend 17u Elite participated in the V Tool Showcase throughout Sacramento and Stockton, sweeping the competition on their way to a 5-0 weekend. V Tool Showcase is an organization that puts out top-notch showcases across the country where college coaches come to recruit players. The V Tool Showcase also provided top-level facilities with g

ames at University of the Pacific, Folsom Lake College, and Sacramento State with games against quality competition from teams throughout the West Coast. Offense was the key for 17u Elite as they scored 41 in 5 games en route to their 5-0 weekend.

After falling behind early against Team California Bay Area in their first game on Thursday, the Warriors came back strong with hits from Teddy Hoxie, Marty Cole, and Tyler Quintanilla to cut the Team California lead to just one run in the bottom of the third. The Warriors kept rolling with six more runs in the bottom of the fourth, and four more in the fifth to go up 14-6, eventually winning the game by that score. Marty Cole had a phenomenal day on both the mound and at the plate, going 6 innings, recording 5 strikeouts, and going 2-3 with a triple and 4 RBI’s at the plate. Teddy Hoxie added two doubles with 3 RBI’s.

17u Elite kept it rolling with their second game of the night against Bulldogs Baseball in a back and forth affair. After putting up five runs in the first three innings, The Bulldogs responded with a big inning of their own, but it was not enough as Tyler Quintanilla came in for an 8 out save. Quintanilla struck out three and allowed just one hit, clinching a 7-6 win for the Warriors.

On Friday, the Warriors put up 4 early runs, which was all starting pitcher Teddy Hoxie would need. Hoxie went 7 innings with 9 strikeouts, while allowing just three hits in the shutout win against NorCal Scarlet.

In the first game on Saturday, Chris Giles and Anthony Pomilia led the offense against NorCal TKB. Giles went 3-4 with an RBI, 2 runs, and 2 stolen bases, and Pomilia went 2-2 with a double and 2 RBI’s. Pitchers Tyler Quintanilla, Gremelt Balladeres, and Alex Bires combined for just one earned run on the day in an easy win over NorCal TKB.

Daniel Colwell was on the bump for the Warriors in the second game on Saturday against NorCal Blue. Through four innings, Colwell surrendered just one hit while the offense put up six runs for a comfortable lead. NorCal Blue started to string together some hits and came back to tie the game in the sixth inning. 17u Elite responded with a Dane Goodman leadoff double and a Matt Calhoun knock up the middle for the eventual game-winning run.

The 17u Elite powerful offense led them to a 5-0 record at the V Tool Showcase. Heading into the last couple weeks of the season, every player on the team has developed their skills and the team continues to build chemistry with each game they play. The 17u Elite’s has a couple exhibition games against the Mendocino Dirtbags and the Easton Cats before heading down to San Diego for the Phil Singer Summer Series tournament on July 28.