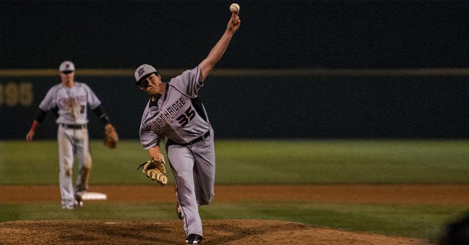 California Warriors alum, Kenny Rosenberg, attends Cal State Northridge and is a pitcher on the D-I Matador’s baseball team. He recently wrote a piece for Matador Baseball Stories, an ongoing series told from the perspective of student-athletes on the CSUN Baseball team. Read the story below to hear how Kenny overcame adversity to ultimately become a stronger and more complete student-athlete. 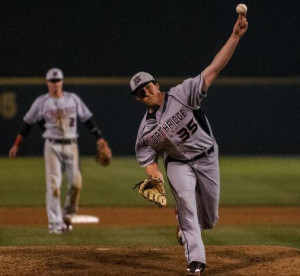 Playing under the lights at Jackie Robinson Stadium against crosstown rival UCLA, the freshman version of myself could have benefited from a few pointers. It was a lot to take in for an 18-year-old kid making his college debut against the defending 2013 NCAA National Champions. Accustomed to being a starting pitcher, I had never even thrown in relief in a game. Coach decided to put me in with two outs in the bottom of the seventh inning, trailing 2-1.

I struck out the first batter on three straight pitches to end the inning, but then gave up a triple to lead off the eighth. My outing against UCLA was the epitome of how my freshman year went. I experienced a mix of peaks and valleys on and off the field, and I didn’t know how to respond to success or failure. In school, practice and competition, I had a lot to learn to become a great student-athlete.

Now at the halfway point in my college career, I’ve taken time to reflect on what it was like for me during my first two years and how I could have shortened the learning curve. Newcomers have considered my advice on many aspects of being a student-athlete. I tell them that I was in their shoes two years ago, but the years go by quickly.

During my first two years of college classes, I had many successes that came with many failures. In my first semester on campus, I finished with a near 4.0 GPA. I then proceeded to drop off during my first “in season” spring semester. Everything that was once so simple became quite complicated. I became focused on what I had to do to get by and I lost sight of what I needed to do to become a great student-athlete.

Looking back at my experience, I would tell my younger self that there is more to being an average student. I would emphasize that academics should be a priority.

When I set foot in the athletics’ weight room for our first 5 a.m. team lift in August of 2013, I didn’t have the body of a Division I athlete. I hardly lifted or worked out at all in high school, which gave me a large gap to cover in a short amount of time. I did my best to keep up with the rest of the guys who had been doing the exercises for years. Some of the upperclassmen were squatting more than 400 pounds, while I was still trying to learn the basic mechanics of a back squat. What I didn’t realize at the time was that everyone has to start somewhere and I needed to learn how to do everything the right way. While the strength coaches did a good job of explaining the right form to complete the exercises, it was up to the student-athlete to put it into action. If I could give my freshman self one piece of advice in the weight room, it would be to be honest with myself and lift only what I’m capable of. Also, I would encourage myself to trust that the coaches and other players would rather see me working to improve than see me try to impress.

After having success on and off the field during my freshman year, I went into my sophomore year with high expectations that I was physically and mentally unable to meet. After posting my worst GPA in the fall while simultaneously going down with a lower back injury, I had practically hit rock bottom academically and athletically. I watched every game for the first month of the season from a folding chair on the sidelines or by my computer, not knowing when my back would heal or when I’d even be able to throw again. By March 2015, I had a diagnosis and came to understand that I wouldn’t play for the rest of the year.

After being away from the game that I love for so long and by watching my teammates compete from afar on a low definition online video stream, something finally clicked. I focused on my education and began to right the ship. My grades improved. I also dedicated myself to my rehab program to get healthy. Eventually, without picking up a ball for nearly six months, I was cleared for unrestricted activity in June and soon after I started pitching again.

I believe that I needed to get hurt. I know it sounds weird, but my injury may have been my body letting me know that something wasn’t working properly. Now that I am healthy, I look back and see clearly where I went wrong. Sadly time machines don’t exist, but the best thing to do with hindsight is to use it for self-improvement. No matter what the obstacle is, no matter if you pass or fail, your experiences must be learning experiences.

If I could give a final piece of advice to every student-athlete, it would be to stay on an even keel. They may not encounter the same challenges that I have, but I promise they will be tested one way or another. Success and failure will come and go but the key is to treat them as one and the same – an opportunity for growth.