California Warriors Thriving At Every Level 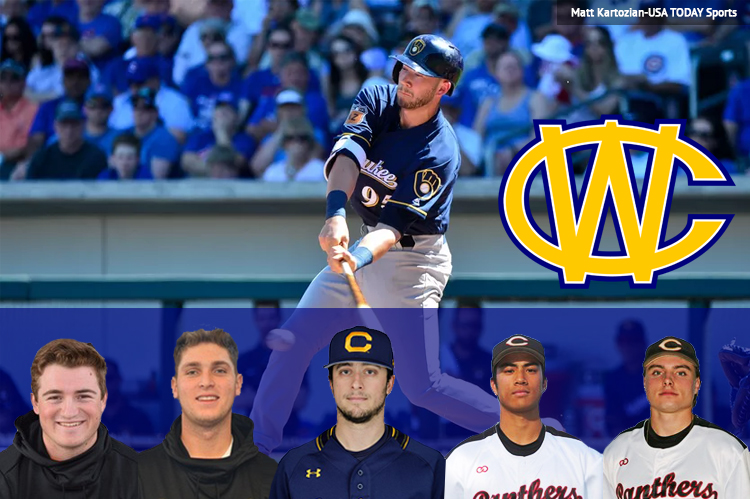 Lucas Erceg | Milwaukee Brewers | 3B: Listed on the Milwaukee Brewers website as the organization’s #4 prospect, Erceg has played his way onto the Spring Training roster with the Brewers. So far this spring, Lucas has gone 2 for 4 to follow a productive 2017 season at the Class A Advanced level in which he collected 33 Doubles, 15 HR, and a Carolina League-leading 81 RBI.

Matt Ladrech | UC Berkeley | P: Senior pitcher, Matt Ladrech is a key part of what looks to be a strong 2018 CAL Bears roster. He lived up to the expectations as CAL swept Cal State Bakersfield to open the season and Ladrech tossed 7 IP in his start while striking out 2, giving up 1 ER, and earning the Win.

Mason Collins | Chapman University | P: Mason has made an impact on the bump for the Panthers this season, earning a Win over 7.1 IP while striking out 5 and maintaining a low 2.45 ERA.

Joe Jimenez | Chapman University | C: A sophomore at Chapman who returned to the California Warriors to coach during the 2017 summer, Joe has made the most of his time on the diamond this year. Over 9 Plate Appearances, Joe has 4 BB’s and a HR while scoring twice and driving in 2 RBI on his way to a .200 AVG / .556 OBP / .800 SLG triple-slash.

Alex Davis | College of Marin | SS: Alex has been one of the most productive hitters in the Mariners lineup so far this season, dismantling opposing pitching to the tune of .408 AVG / .508 OBP / .510 SLG over 49 AB’s. To complement those numbers, the Sophomore shortstop has 7 Runs, 8 RBI, and 5 SB, making him a force in the heart of the lineup.

Nick Roth | College of Marin | P: On the hill for the COM Mariners, Roth has been as steady as anybody, tossing 9.2 Innings of lights-out ball in relief. Nick has converted all of his Save opportunities this season – he has tallied 4 so far – and has 10 K’s and a 1.86 ERA to his name.